This residential society in Madhapur reduced its electricity bills to ZERO, you too can! 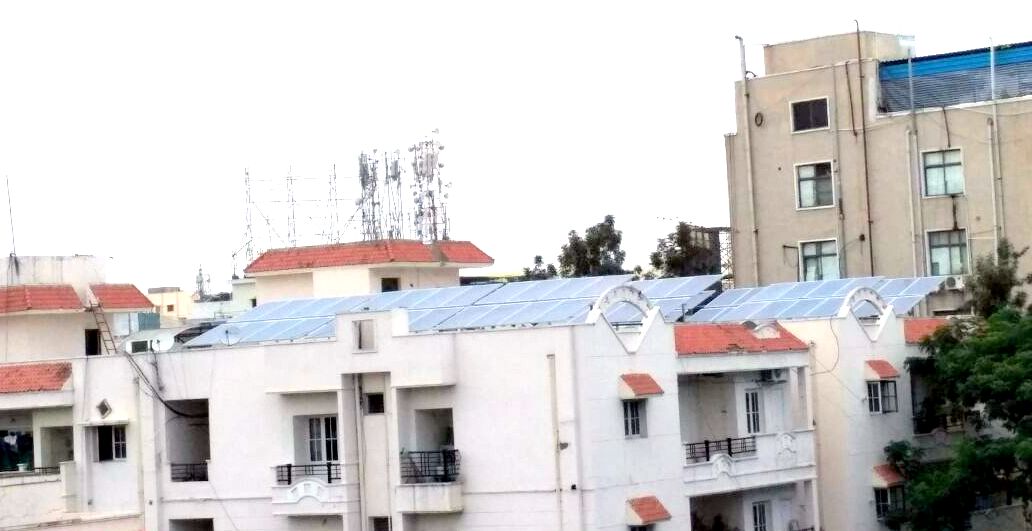 Electricity bills never pinched the apartment society’s monthly expenses a decade ago. The electricity bills continued to increase steadily over last 10 years and are now more than double, not because of the high consumption but the electricity rates have more than doubled. The Kavuri Hills Apartment Association had felt the pinch and were looking for ways to reduce the bills. They tried energy efficiency measures initially but after exhausting all other options decided to go for Solar Power.

After selecting a suitable supplier, it took them couple of months to get the approvals from the Electricity Department. They had more than enough space on their top floor terrace to place the 20KW Solar Panels. Once setup, it took another month to get all the documentation sorted with the electricity department and they eagerly waited for the benefit to flow in the form of reduced electricity bill. To their surprise, the bills came down to ZERO, well almost, as they anyway need to pay the minimum charge of Rs. 298 for the connection. Earlier their monthly bills used to be hovering around Rs. 25,000 to 30,000.

Going by the savings, Society officials believe that they would recover their investment in 4-5 years, and post that it would be almost free electricity. The maintenance cost is expected to be quite low, at less than 2% of the total investment. It makes sense as the life of the Solar panels is more than 25 years. Moreover, the Society members have a great sense of pride in setting up the eco-friendly electricity generator that would serve them for years to come.
The setup is done end to end by Hyderabad based Gosolgen. Gosolgen CEO Mr Tarun Singh believes that Solar Power has not been able to reach the masses because of high cost and perceived complexity. His sole aim is to make it affordable and remove all complexity in buying Solar system. ‘It should be as easy as buying a car and park it in your home. In this case, it would be the roof’ he says with a smile.